The vineyard of Château Pichon Longueville Comtesse de Lalande covers an area of 85 hectares located mainly on the Pauillac appellation but overflowing on the Saint Julien appellation (11 hectares of vines). This particularity gives the estate its unique terroir, allowing it to produce wines of a more pronounced refinement than its peers.

The part of the vineyard overlooking the Gironde estuary was not affected by the frost at the end of April 2017. The rest of the vineyard was not spared, causing losses of about 10% of production.
The 2017 vintage of the Réserve de la Comtesse is produced from a blend mainly of Cabernet Sauvignon (60%) and Merlot (36%), completed by Cabernet Franc and Petit Verdot (2% each) then aged for 12 months in barrels (30% of which are new).

The Réserve de la Comtesse 2017 has a beautiful deep and intense purple colour with garnet tints and reveals an expressive bouquet of black fruits (dominated by blackcurrant), flowers like violet as well as subtle notes of cocoa and spices.
Once on the palate, the Réserve de la Comtesse 2017 offers a medium body. Round and refined, it distills a beautiful freshness on the attack then, in the middle of mouth, reveals fruity aromas supported by finely worked tannins. The fruit develops in the mouth, leaving an earthy touch on a long and very elegant finish. 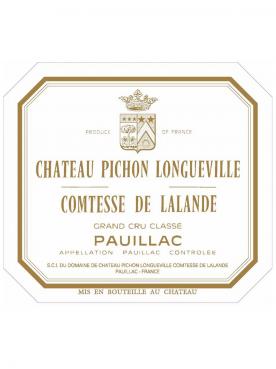