Back to Chateau's Collections 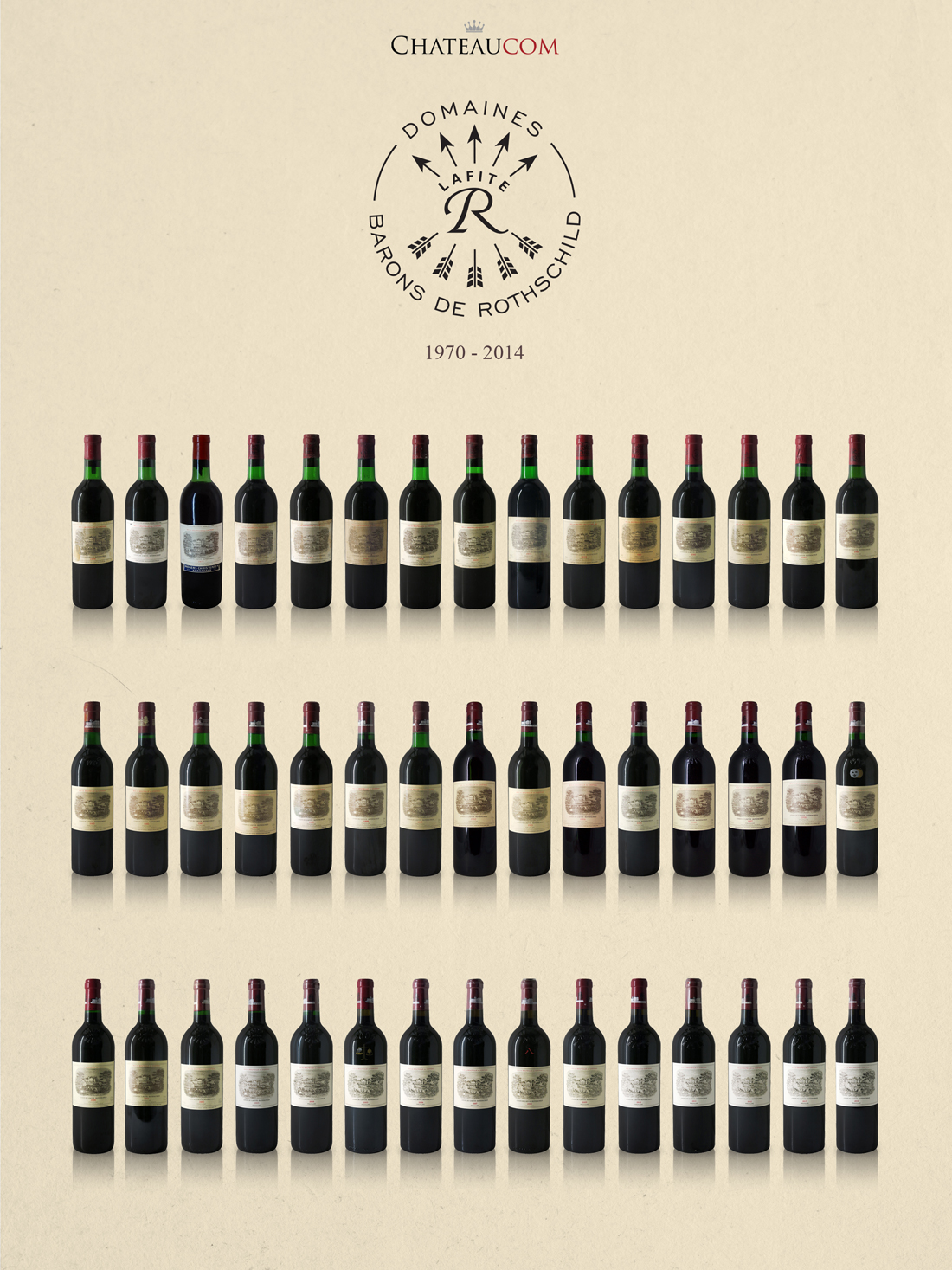 Breeding: Aging from 18 to 20 months in new barrels

At maturity in 10 to 50 years depending on the vintage.

1976 (RP : 93): «The 1976 Lafite clearly stands far above the crowd in this vintage. A beautiful bouquet of seductive cedarwood, spices, and ripe fruit precedes a very concentrated, darkly colored wine, with great length and texture. Some amber is just beginning to appear at the edge. The 1976 has turned out to be the best Lafite of the '70s.»

1998 (RP : 96): «A blend of 81% Cabernet Sauvignon and 19% Merlot, the 1998 Lafite Rothschild is deep garnet with a hint of brick and gorgeous notions of sandalwood, crème de cassis, smoked meats, black pepper and garrigue with touches of chargrill, dried herbs and mincemeat pie. Medium-bodied, soft and plush on the palate, it has tons of mouth-filling savory and plum preserves flavors and a very long, savory finish.»

2000 (RP : 98+): «A blend of 93.3% Cabernet Sauvignon and the rest Merlot, the wine still has a dark ruby/purple color and an extraordinarily youthful nose of graphite, black currants, sweet, unsmoked cigar tobacco, and flowers. The wine is rich, medium to full-bodied, but has that ethereal elegance and purity that is always Lafite. I originally predicted that it would first reach maturity in 2011, but I would push that back by 5-7 years now, although it has 50-60 years of life in front of it.»

2003 (RP : 100): «The 2003 Lafite Rothschild comes as close to perfection as any of the great Lafites made over the past three decades (1982, 1986, 1996, 2000, 2005, 2008, 2009 and 2010). This sensational effort came in at 12.7% natural alcohol, it is made in the style of one of this estate’s great classics, the 1959. Composed of 86% Cabernet Sauvignon, 9% Merlot and the rest Cabernet Franc and Petit Verdot, it exhibits a dense ruby/purple color to the rim along with a luxurious bouquet of cedarwood, lead pencil shaving, white chocolate, cocoa and cassis. Fat, rich, opulent and full-bodied with low acidity and stunning seductiveness and complexity, this noble wine possesses a bountiful, generous, heady style. It is just coming into its plateau of maturity where it should hold for 20-25 years. This is one of the candidates for the wine of the vintage – make no mistake about that.»

2008 (RP : 98): «A candidate for the -wine of the vintage,- the 2008 should have been purchased before it began to soar in value because of the significance of the number 8 in the Chinese culture (denoting good luck). Representing 40% of the production, this blend of 83% Cabernet Sauvignon, 13% Merlot and 4% Cabernet Franc offers aromas of high quality unsmoked cigar tobacco, lead pencil shavings, creme de cassis, earth, cedar and asphalt. Full, rich and stunningly concentrated, I doubt it is inferior to the 2010, just more classic as well as slightly more forward and a degree weaker in alcoholic potency (12.5% versus 13.5%). The 2008 should be relatively drinkable in 6-10 years as it is already showing remarkable complexity and breed, and will last for 30-35 years...at the minimum.»

2010 (RP : 98): «The 2010 Lafite Rothschild, a blend of 87% Cabernet Sauvignon and 13% Merlot (a 3% difference from the barrel sample shown two years ago), achieved relatively high alcohol of 13.32%, according to administrator Charles Chevalier. The wine is very impressive, not as fleshy, flamboyant and massive as the 2009, but nevertheless, a big, rich, full-throttle Lafite-Rothschild meant to age a half century or more. Deep purple, with notes of white chocolate, mocha, cedar and charcoal as well as hints of vanillin and creme de cassis, the wine is full-bodied yet has that ethereal lightness that makes it a Lafite. Rich, with good acidity, precision and freshness, this is a slightly zestier version of the 2009 as well as more restrained and structured than that particular vintage. It will need at least 10-12 years of cellaring and keep for 50+ years.»